The practice of annotating phonetic readings on top of kanji words.

It is often (but not always) used to aid the person who is reading and might not be familiar with certain kanji or spellings.

As you can see, there’s no hard rules about what goes in furigana. For some Ateji words, you will often see katakana as furigana. Sometimes authors even like having fun and put kanji as furigana for other kanji: 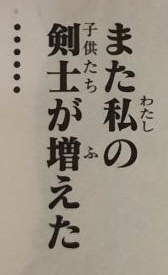 When Kanji first arrived in Japan, it was used to render Chinese (usually religious) scriptures. In the timespan of half a millennia-ish (400AD -> 1000AD) kanji became not only a Chinese import, but also a representation of the local language with complex pronunciations and readings (see: Onyomi and Kunyomi).

As a practice common in all Chinese territories at the time, like the Korean peninsula or Vietnam, various glossings and annotations were added to these Chinese scriptures to make it easier to scholars and Buddhist monks to recite the text out loud in the local language/dialect.

These annotations are called and the practice of annotating classical Chinese texts (also called ) is called .

You’ll find furigana everywhere and especially for Japanese learners it can be a lifesaver. It makes it easier to read complex words and also makes it possible to look up by their readings in a dictionary insead of having to rely on radical search or having to draw the kanji (see also: How do I look up the meaning of this kanji?).

Depending on the publisher and the author’s own preferences, books will sometimes follow certain established rules on where to apply furigana:

Another very common practice of using furigana is that of adding inconsistent or unusual readings on top of certain kanji used as for poetic or literary purposes. See: Gikun (義訓)#