Gikun are a specific literary device used in Japanese to add an extra layer of poeticism or style to narrative text. It’s a very commonly adopted and widespread technique among many Japanese authors and chances are if you read native material (even simple manga) it’s very likely that you’ve come across it yourself.

The fundamental idea behind is to write words with an incorrect kanji and annotate them using Furigana to instruct the reader of the actual reading of the word that was supposed to be in their place instead.

This specific usage of furigana adds a level of nuance that is hard to grasp for someone who’s not used to logographic languages: as westerners we aren’t used to separating the form from the meaning in our written texts, however in Japanese this kind of parallel is very common to make. The closest comparison I can make would be that of metaphors.

And now let’s annotate it: 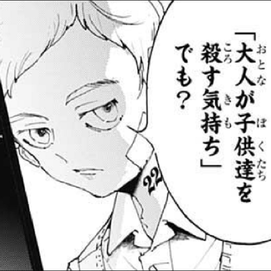 In this panel from 約束のネバーランド Norman says the word ぼくたち (“us”) but the actual text in kanji spells 子供達 (“kids”, plural). Normally you’d read that as こどもたち, however the furigana indicates that the word he spoke is actually different.

This is the perfect example of using kanji and its reading to gain extra nuance that would otherwise have been impossible to have. By analyzing this panel we know these two facts:

Another example from 約束のネバーランド. This time the is much more utilitarian and less poetic. The author makes sure to specify that when the character says ここ (“here”), he’s actually talking about the place they are at and reminds the reader that the location is called “GP”.

In this example from the くまクマ熊ベアー light novel, the main character Yuna (who is dressed like a bear) is writing a fictional story about an actual bear. It is a bit of an auto-biographical in-universe joke story and, since she identifies as the bear in the book she’s writing, she uses the word わたし (“I”) but the author annotates it with クマ (“bear”) to make it clear for the reader that she’s not talking about herself but about the actual bear in the story.